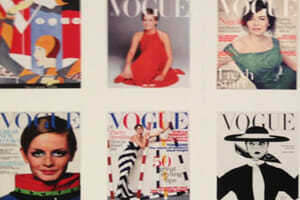 A Fashion-Filled Weekend at the Vogue Festival

Vogue – the style bible that’s been around for over 120 years, the magazine that’s been at the centre of debate for putting Kim-K and Kanye on its front cover, and now the organisers of a fashion-filled festival…
This weekend, I headed down to the Queen Elizabeth Hall on the Southbank for the third annual Vogue Festival. It was a chance to hear talks from some of the world’s leading influencers, designers and style-savvy crowd, and hear their commentary on the power of fashion and where the industry is taking us next.

Battling my way through a sea of street-style hunters, I joined a crowd of fashionistas who were all there to hear Turner Prize-winning artist Grayson Perry, singer and songwriter Lily Allen and British designer Jasper Conran, in conversation about what taste is.

And what makes good taste? Well from the debate the topic caused, it’s clear that taste is subjective. If you think about the traditional red carpet ceremony look, all the stars are immaculately turned out in classical couture dresses. But is that good taste? According to Grayson Perry, we’ve all been conditioned into what taste is. We think we’re being individual but really, good taste is that that does not alienate your peers – it’s the ‘safe’ option.

Being provocative in the way we dress and being an individual in the truest sense, is considered good taste, believes Jasper Conran. And in the age of the selfie, which according to Lily Allen is more about self-promotion rather than self-discovery, it’s even more important to use the way we dress as a form of expression.

One thing that can definitely be agreed on is that the fashion world is artistic, inspirational and innovative, but most of all it’s exciting and fun. So regardless of whether something is judged good taste or not, fashions come, so perhaps good taste is just bad taste plus timing.